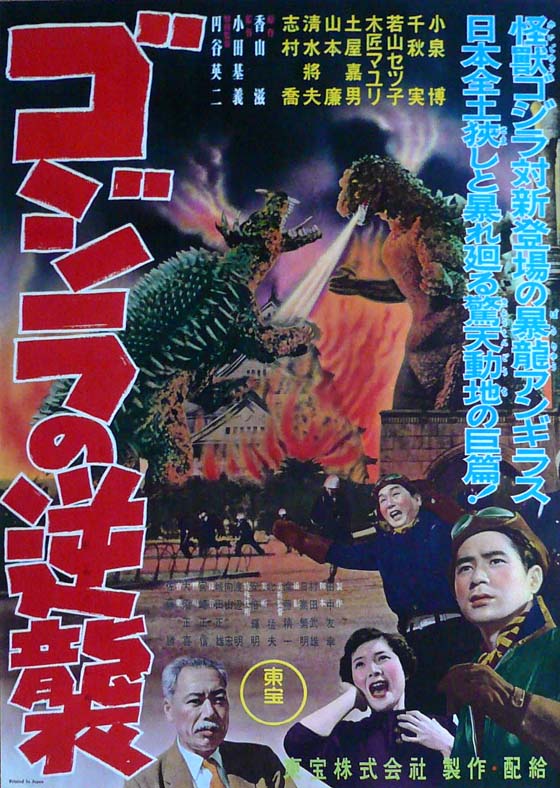 After the overwhelming success of the original Godzilla, Toho studios immediately ordered a sequel to be made. But with the original director, Ishiro Honda, working on another project, the studio called in a new director, Motoyoshi Oda, to take the helm. This, coupled with the fact that the sequel was released less than a year after the original, makes Godzilla Raids Again one of the more peculiar films in the franchise.

Right away, this movie gives off the impression that it was very rushed during development. Characters from the original are bought in and discarded at a moments notice and the first time we see Godzilla in the full, it is through reused footage from the original film that runs for a lot longer than it has the right to, if at all. On top of this the film is a mere 80 minutes long but it feels like it’s 2 hours! The usual meaning for this is that a film is – well – boring. But how can the first sequel to Godzilla, the movie that spawned the longest running cinematic franchise, possibly be boring?

Well it all starts with how Godzilla is portrayed.

Watching this film right after the original reveals the difference in cinematography and shot composition used by the two different directors. For instance, Ishiro Honda preferred to use Godzilla in wide shots alongside miniatures to display his size and grandeur. By contrast, Motoyoshi Oda uses a lot of closeups on the monster and it reveals some sad truths about Godzilla’s design. For instance, Godzilla’s overbite of spiked teeth looked horrifying in the original because they were normally seen from afar and framed from below. But in the sequel they are often framed from the side and it honestly just makes it look like Godzilla missed one to many dentist appointments. Furthermore what wide shots are used of Godzilla in the sequel don’t frame him against miniatures all that often, and thus his enormous size isn’t communicated. It comes to a point in this film where you realise you’re watching a man in a suit, not Godzilla.

Additionally this film is split into two parts. The first part is where Godzilla must fight and defeat his first enemy, Anguirus and the second part where the humans must fight and defeat Godzilla. Now, the main appeal to this movie for many would be the fact this is the first film that Godzilla fought another monster. Truth be told, however, the monster fights are the most boring part of this film. They drag on for too long, don’t provide much of a spectacle and lack creativity. The majority of the fight involves the two combatants just awkwardly bumping into one and other, and occasionally one might fall over. It isn’t until the end that anything noteworthy occurs in the fight, where Godzilla throws Anguirus through a building and proceeds to burn him alive.

What’s more interesting, and a part of this otherwise boring movie I did honestly enjoy, is the conflict between Godzilla and the humans. With the creator of the Oxygen Destroyer dead and humanity unable to reuse it, in order to defeat Godzilla in the same way they did in the original, the humans must rely on their smarts and wit in order to bring Godzilla down. After it quickly becomes apparent Godzilla can’t be conventionally killed, the humans chase Godzilla to the frozen north where he takes shelter on a snowy island. By luring the monster into a ravine, the humans enact a risky plan to bomb the mountains and trap Godzilla under an avalanche. This final scene provides a lot of action as Japan’s bombers are forced to make multiple passes past Godzilla and through the ravine, where they are caught in his atomic breath or unable to pull out of the mountains in time to avoid crashing into them. It’s a genuinely good action scene full of tension that I wished the rest of the movie could have been able to replicate.

Unfortunately an entire movie, even a mere 80 minute one, cannot ride on a single good action scene. Too much of this movie is dull, full of padding and just unengaging to watch. I’ll admit that the second time I watched this film I enjoyed it a great amount more than the first. But even so, I’d still have to describe this film as lacklustre and, in the spirit of honesty, I’d recommend skipping this film if you’re looking to get into Godzilla out of fear it’ll make you not want to watch any more of his cinematic adventures.

At the end of every Godzilla review I will be rating them alongside others I have reviewed. Here is the updated list: