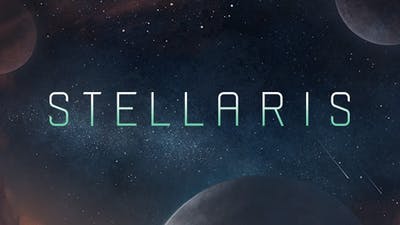 Have you ever wanted to displace and entire civilisation? Have you ever wanted to declare those who have wronged you as “degenerates”? Has the urge to genetically modify your enemies to be objectively poor at everything they need to do to survive ever overcome you? And finally, have you ever considered the notion of melting an entire species, by the billions, in your organic-matter absorbing generators in order to power and fund the construction and upkeep your unjustifiably large military space fleet? If you answered yes to any of these questions, Stellaris might be the game for you.

Stellaris is a 4X grand strategy game about building a space-faring empire and slowly, at first reluctantly, but inevitably out of desire, becoming more and more heinously xenophobic and racist towards all of your neighbours. For a grand strategy game, what makes Stellaris so good is that its core mechanics are immediately accessible and easy to learn; Simply scout solar systems and build a starbase to claim it for your Empire, assuming it isn’t already occupied. From these starbases you may transport settlers to colonize planets, upon which you can construct various buildings to increase your resources and expand your military. These resources are energy (upkeeps everything you build), minerals and alloys (to construct military and buildings) and food and consumer goods (to assure your population doesn’t starve or revolt, assuming you’re not playing as a ravenous hivemind, or swarm of sentient machines).

Playing as different governments and species, which you can design yourself to suit your playstyle, can drastically change your experience. For instance you can play as spiritualists whose sense of connection allows them to, eventually, telepathically summon giant space ghosts to guard their borders, or as mechanists who can genetically engineer their entire species to suit the ever-changing needs of the civilisation. That, or you can play as pacifists and quit the game to start again when you realise you don’t have access to the funniest part of it…

Oh, Stellaris, how you bring out the masochist in me. It seems like only yesterday we raided those slug-people, abducted their citizens and sold them on the slave market to the highest bidder. Or when we realised the machines we had built had become sentient, capable of empathy and emotions, but denied them the same rights as the rest of us because of the repercussions that it could have on the economy, resulting in robot uprisings that were all put down with lethal force.

I remember the first time I build a planet killing weapon and you gave me so many seductive ways of fuelling my spree of violence. I could have picked anything from a traditional Death Star type laser, to a gas dispenser that would drain all organic life, and even a mind controlling mechanism that would make the entire population of hostile planets sympathetic to the ideology of my regime. But I didn’t choose any of those – I chose the Global Pacifier; A device that built an indestructible shield around the victim planets, trapping the inhabitants within forever where they’d slowly, but surely die of over population and resource shortages. They’d live in the knowledge that there is a wider, infinite universe outside of their shield, but would be forever unable to grasp the beyond.

The Galactic Senate will surely hate you for doing all of this, but then again they’ll surely hate you anyway if you refused to join the Senate – The Senate being a government formed by a collection of space-faring Empires that passes legislation laws that can encourage or discourage certain aspects of gameplay. This includes everything from trade laws and the sharing of technology among members of the senate, to demilitarising entire sections of the galaxy. A cunning politician could secure themselves a seat on the Council heading the Senate, meaning their votes on legislation count for much more than they have the right to, and then link the weight of any nations vote to the aspect of the game your species and government is best at, be it resource management, military strength, or technology. Send diplomats to your fellow councillors to get them on side, and pass any piece legislation you want, regardless of how many people may oppose it. Use your own voting power alone to vote for yourself in every re-election and permanently be one of the heads of the senate. Want to denounce a rival empire and permanently harm their reputation with the rest of the Senate? You absolutely can, and then wage endless wars against them with little to no objection from your fellow councillors. Failing to get along with the other councillors heads? Are they blocking your legislation? Simply use all of your voting power to make it so only one nation oversees the entire senate (yourself) with the voting power once again based on what your nation is best at. And if that isn’t enough for your vote to outweigh everyone else’s, just bribe the galaxy’s most influential empires into voting with you. After all of this, you’ll have made Emperor Palpatine proud.

But if you’re like me and prefer a more *direct* approach to obtaining absolute power, why not play as a fanatical purifier, a ravenous horde, or a driven assimilator – all of which have one purpose: To kill and exterminate anything that isn’t themselves. Diplomacy? Hah; I laugh in the face of negotiations! It might be intimidating to see the whole galaxy is rooting against you, but your lack of a need of certain resources, which are crucial to regular governments, will give you more resources to spend on a fleet so large your game will be dropping more and more frames with each subsequent hostile engagement.

Stellaris truly is a magnificent game, with core mechanics that are easily accessible but also with surrounding mechanics that are full of depth and complexity. The number of approaches you can take to slowly assert yourself as a super power are astonishing and addicting. This game is a must play for anyone into 4X or grand strategy (or both), and a recommended title for people looking to get into those genres, but who often find other games of the same type a little overwhelming.

So get this game and purge some filthy xenos.