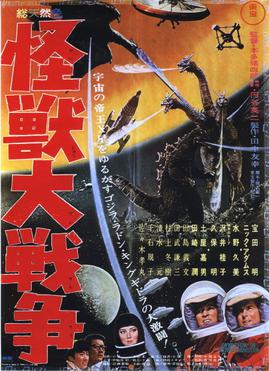 After the success of Ghidorah the Three-Headed Monster, a sequel was commissioned to be released the following year by Toho, once again directed by Ishiro Honda. The resulting film was the peculiar Invasion of Astro-Monster, which is peculiar because it is more a typical alien invasion movie than Godzilla movie, and because it is a very good film because of this reason, not in spite of it.

When humanity makes contact with the alien inhabitants of Planet X, the aliens ask that Earth lend them Godzilla and Rodan so that they can repel the attacks of King Ghidorah on their planet. The naïve humans agree and soon find themselves back-stabbed by the aliens, who besiege Earth with their flying saucers and use mind control abilities to force Godzilla, Rodan and King Ghidorah to destroy it’s cities.

Going into this film, you should not expect too many monster brawls. Other than two brief skirmishes at the beginning and end of the film there is very little monster-on-monster action, although what is provided is certainly memorable. To make up for this, however, there are plenty of scenes of destruction where the three monsters trample buildings and set them ablaze, alongside brief scenes of the flying saucers blasting the human military to shreds.

Resultingly the film relies a lot on its cast to do the heavy lifting in conveying the stakes and providing tension. Thankfully, the cast of this movie is probably the strongest out of all of the Show Era Godzilla films. The result is a group of characters – two star-crossed lovers, a brainy astronaut, an failed inventor and their boss – who are all well defined and realised characters, each of whom have a specific skill or event that occurs to them which comes back around to help the humans resist the alien invasion at the end of the movie. I am happy to say that because of the compelling cast, this was one of the more enticing monster movies I’ve watched in a while, just because of how fresh it felt.

There is very little negative to say about this title other than that some of special effects of the flying saucers and of King Ghidorah flying looked a little off, mostly because of how the strings holding them up above the set are very noticeable in a number of different shots. Of course this doesn’t detriment the film as a whole, but it is distracting and an unfortunate fault that wasn’t as present in previous Godzilla films.

While some viewers might find the film lacking in giving the monsters screen-time, others might be as pleasantly surprised as I was to have a film that simulatiously combines the brisk pacing of Ghidorah the Three-Head Monster and the character-focussed narrative of Mothra vs Godzilla into a film that is one of the more underrated Godzilla films.

At the end of every Godzilla review, I rank the films based on how much I have enjoyed the movies I have seen so far. The updated list is below: