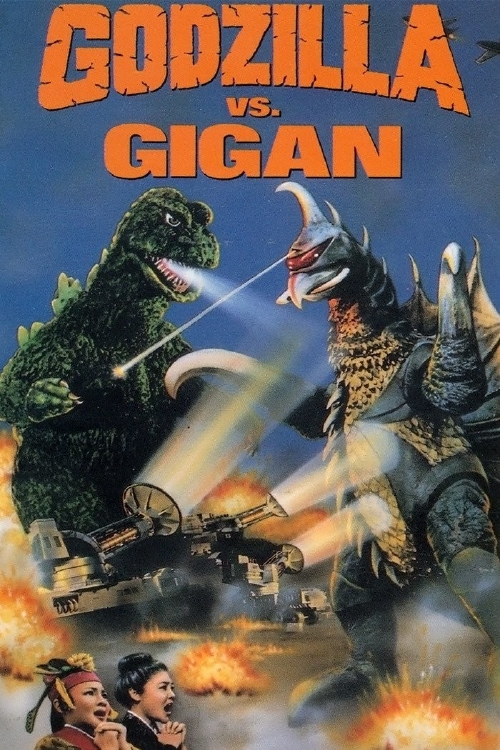 After becoming unsatisfied with the release of Godzilla vs Hedorah, Toho decided that the best way to salvage the Godzilla franchise was to deliver a more traditional experience that fans would recognise from the films produced during the 60’s, while still keeping their focus on appealing to children. With this in mind they once again approached Jun Fukuda, who had been absent from the series since Son of Godzilla, who set out to make a flashy Godzilla flick.

When a young artist is employed by a suspicious company, he finds himself wrapped up in a missing person corporate conspiracy with aliens at the centre of it, and must team up with a group of misfits to stop their plan for global domination by taking control of King Ghidorah and a brand new monster, Gigan. After the alien technology awakens Godzilla and Anguirus, the two monsters make their way to Japan to do battle against the alien invaders.

For a film that was trying to be very flashy, what strikes me most about it is how cheap it feels compared to almost all the others that came before it – even the likes of All Monsters Attack. Part of the reason for this was that there was the looming threat of an economic depression in Japan around the time of this movie’s production, and so Toho cut the budget. The result is the use of a lot of stock footage primarily from Destroy All Monsters, but also from Ghidorah the Three-Headed Monster, Invasion of Astro Monster and Son of Godzilla. The music apparently suffered as well because, despite having the series original composer on board who did orchestrate a great new theme for the movie, a lot of it was recycled cues from previous entries. Some of the model work suffers too because the city destruction scenes do little to hide that they’re in a studio, and so the illusion of the movie is often broken. Considering that his previous Godzilla films had been relatively well received, I think it’s fair to say that whatever Jun Fukunda had envisioned for this film never quite came to fruition due events outside of his control. And as much as I liked some of the more experimental and unique stuff in Godzilla vs Hedorah, I’m glad this film decided to be more traditional as it may have suffered more if it had decided not to be.

Nevertheless there are some saving graces to this film. Gigan is the best thing about it because of how utterly unique and out there he is in design. Much like Hedorah, he is a one-of-a-kind foe for Godzilla to fight due to how he engages in combat with spiked hands and feet, as well as making use of a buzz saw on his chest. He is certainly threatening and great to see on screen. What makes him particularly noteworthy is that he is the first enemy to make Godzilla bleed, thus proving he is not to be underestimated just because he’s the new monster on the block. And it’s a good job that these newly incorporated action scenes work so well, since this film would be the last time that suit actor Haruo Nakajima would depict Godzilla. Following Godzilla vs Gigan, and eighteen years of depicting the monster across eleven different films, Haruo sadly passed away. Although other actors would dawn the suit, none would do so for as long as he did.

Unfortunately the action scenes that don’t utilise Godzilla and Gigan are often very boring, mainly because they are almost all entirely made up of stock footage. In the finale, a fight is teased between Ghidorah and Anguirus but the entire thing is footage lifted from Destroy and Monsters. What makes the use of stock footage in this film a little more damning than in All Monsters Attack is that, although there is less of it, the final battle takes place at night time and the stock footage they cut to takes place during the day. In some of the stock footage you can tell they put a filter over it to make it look like night time, but in others it seems as though they didn’t try to hide this at all. It’s incredibly jarring an immersion breaking, which makes it hard to look past.

There are also environmental messages in this film, mainly tied to the motivation of the alien invaders, but they’re so offhand and quickly left behind that part of me wishes the movie would have just cut it out, and embraced being a dumb monster movie. By this point in the Showa Era that is pretty much all Godzilla is, and these extra themes they force in to give the illusion of depth never have room to grow or have a meaningful impact on the audience, so they realistically just shouldn’t be involved at all. Especially as this film has one of the silliest moments in all of Godzilla history: When Godzilla and Anguirus speak. And no, not in the way the monsters spoke in Ghidorah the Three-Headed Monster where they just sort of roar at each other and come to an understanding. They actually talk as though they are having a fluent conversation, with speech bubbles erupting from their mouths to translate the words. I am fine with stuff like this and love the silliness, but I feel as though the movie needs to commit to it to make it work, in the same way King Kong vs Godzilla committed to being the silliest thing is possibly could and was better for it.

Overall, aside from some good action and a unique new monster, there is very little about Godzilla worth mentioning. The return to traditional the alien invasion stories we saw in the 60’s movies may have been a blessing in that it gave itself well to the lowered budget and thus didn’t require anyone to come up with new whacky concepts for the franchise, but it also hindered the movie in that the story feels stale and generic. I find it hard to recommend any of part of this film, other than the last thirty minutes, but even that is riddled with stock footage.

At the end of every review I rank all the Godzilla films I have reviewed so far from best to worst. Find the updated list below: